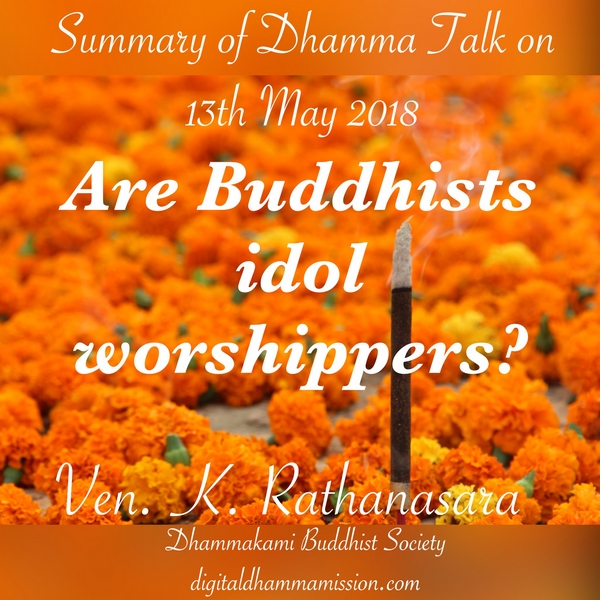 Devotional practices can be easily misunderstood or misinterpreted as idol worshipping. The Buddha in fact discouraged idol worshipping. He said, “It is because of fear and threatened with fear, human beings go to refuge to the mountain, to the trees, to the pagodas and they pay homage to these things. No one can achieve enlightenment or end suffering by paying homage to mountains, pagodas, hills, trees or idols. If a human being were to go to refuge to the Buddha, the Dhamma and the Sangha, and by following the Noble Eightfold Path, if that human being were to penetrate the Four Noble Truths, and realise it, that human being ends suffering. That human being attains enlightenment.”

The Buddha’s message is very clear. But when Buddhists visit a temple, they prostrate, take precepts, pay homage to the Buddha, the Dhamma and the Sangha, make offerings of light, incense and flowers and make aspirations. These practices when seen by others who do not understand, see Buddhists as idol worshippers. For the practitioner who understands, it is not. The Buddha has said that the Noble Eightfold Path is the way to attain enlightenment. Although devotional practices are not compulsory, they are a skilful aid for practice and are indirectly linked to the Noble Eightfold Path.

The Noble Eightfold Path is a practice for those who have trust and respect in the Buddha. Someone who takes refuge in the Buddha, Dhamma and Sangha is akin to someone taking refuge on higher ground where there is a flood. A Buddhist practitioner understands that there is danger in the repeated cycle of birth and death, and therefore he seeks refuge. He accepts the Buddha as a supreme teacher. He also accepts the Dhamma as guideline to eradicate greed, anger and delusion to end suffering. He also accepts the Sangha as disciples of the Buddha who walked the path and attained enlightenment – the purpose of Buddhist practice. The practice of the Noble Eightfold Path consists of three aspects – morality, mental cultivation and wisdom. Buddhist devotional practices supports the cultivation of the Noble Eightfold Path.

In Buddhist devotional practices, a practitioner takes the five precepts to refrain from killing, stealing, sexual misconduct, lying and taking intoxicants. To develop morality in the Noble Eightfold Path, a Buddhist observes these moral principles to cultivate virtue, which conditions the development of mental cultivation.

The third aspect of the Noble Eightfold Path is wisdom. How does the offering of incense, flowers and light represent wisdom? In Buddhist tradition, when we offer incense to the Buddha, someone who is an ocean of virtue, we are dedicating ourselves to developing virtue by following the footsteps of the Buddha.

Enlightenment is found within the body and mind. The body and mind in Buddhist teaching are impermanent, they are nothing but compounded and collected energies. The Buddha further divided them into the five aggregates of form, feeling, perception, mental formations and consciousness. By clinging to these five aggregates, which are subject to change, we cause suffering to ourselves. When we contemplate on the impermanent nature of the flower – its beauty, which is subject to change and eventually withers, we reflect that this is the same with ours and others’ bodies and mind. Wisdom is developed by constantly reflecting on the impermanent nature of all things, and is insight meditation. What is impermanent is not fit to be clung onto as me, mine and myself.

Since delusion is seen as darkness while light dispels darkness, light is a symbol of wisdom. The Buddha is known as the bringer of light, the first to be awakened from the deep sleep of ignorance and also the first who awakens others. When light is offered to the Buddha, one makes an aspiration to end the darkness of delusion. As you can see, these three devotional offerings of incense, flowers and light also represent morality, mental cultivation and wisdom in the Noble Eightfold Path.

Although Buddhist devotional practices are not compulsory for attaining enlightenment, it is nevertheless a useful support for the practice of the Noble Eightfold Path to eradicate greed, hatred and delusion.