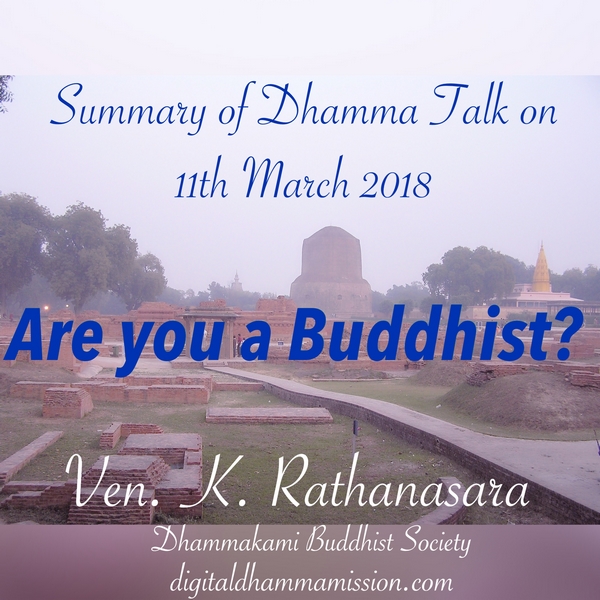 One is a Buddhist not by label, but by practice. Being born into a Buddhist family, being convinced of or liking the Buddha’s teachings, calling oneself a Buddhist – these do not make one a Buddhist. Only when one practises the Dhamma can one truly call oneself a Buddhist. By definition, a Buddhist is one who takes refuge in the Buddha, Dhamma, and Sangha; this has profound meaning and practical aspects to it.

When we say “I go to the Buddha for refuge”, it means I sincerely accept the Buddha as my supreme teacher and spiritual guide, I am trying and working hard to follow the Buddha’s footsteps, and I am dedicating myself to develop both wisdom and compassion with the goal of achieving enlightenment. The Buddha has awakened from ignorance by uprooting all defilements permanently and irreversibly, He then dedicated His mission to teaching other human beings the path towards enlightenment. Just as a lotus flower can arise and bloom in muddy water, we human beings too have the potential and capacity to become enlightened amidst all the defilements.

When we say “I go to the Dhamma for refuge”, it means I am convinced that I want to uphold the noble teachings of the Buddha throughout my life, and shape my life in accordance with these teachings. The Buddha encourages us not to accept the Dhamma out of blind faith, but with right understanding. Just as a goldsmith will test whether a piece of gold is genuine, the Dhamma which is well expounded and well proclaimed by the Buddha, is available for everyone to check, verify, and understand. If we find the Dhamma suitable, we accept it and practise it.

When we say “I go to the Sangha for refuge”, Sangha in this context refers to the noble community of enlightened ones who have achieved enlightenment by entering the Noble Eightfold Path – this is the good path that leads one straight to enlightenment if one practises it, the right path that leads to awakening, and the proper path that eradicates all the defilements. This noble community of enlightened ones is worthy of our respect and reverence, and we want to follow their footsteps.

The Buddha, Dhamma, and Sangha are also collectively referred to as Tiratana in Pali, this means Triple Gem. In the mundane world, jewels and gems are so precious and valuable that people will pay high prices just to possess them. But to a Buddhist who is cultivating to achieve enlightenment, the Buddha, Dhamma, and Sangha, are the most superior type of precious gems, and hence they are known as the Triple Gem.

In many Suttas, the Buddha is referred to as the doctor, the Dhamma as medicine, and the Sangha as nurses. The Buddha understands the disease that all human beings suffer from: greed, hatred, and delusion. Having discovered the medicine which cured Himself perfectly, the Buddha then brings this medicine – the Dhamma – to whoever is willing to take it. The people who are eventually cured are the enlightened ones – the Sangha – who then serve as nurses to help other human beings achieve enlightenment.