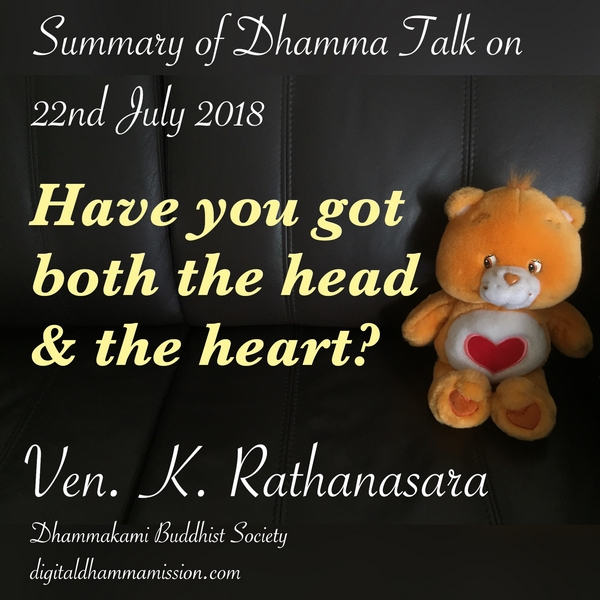 Head represents wisdom, understanding, and intellectual capacity. Heart, on the other hand, represents the human values and wonderful virtuous qualities such as compassion, goodwill, friendship, generosity, and loving kindness. In short, heart represents virtues, while brain represents wisdom. Just like a bird needs a pair of wings to fly, we need both virtues and wisdom, in order to lead a pure righteous life and be a noble human being in the society.

What will be the outcome if one were to develop only the heart qualities or virtues but ignore the development of the brain qualities or wisdom?

In such a case, good virtues will be cultivated, but without wisdom, it is possible that one might eventually be victimised by others. The danger of developing heart qualities without brain qualities, is that one might be taken advantage of by evil, wicked and immoral people who might find virtues such as compassion, goodwill, and gratitude as weaknesses. If one were to face such situations in life, sufferings occur – one would feel unhappy that his good qualities were being taken advantage of, and it is possible that anger, hatred, jealousy, cruelty, and many other defilements might arise in one’s mind, possibly leading to destructive actions that result in suffering for oneself and others. Hence, cultivation of virtues must go hand in hand with wisdom.

Another danger of developing only the heart qualities, is that it is possible one might become a nuisance to the society due to the lack of common sense. Whilst compassionate acts of care and love for animals are indeed virtuous, such acts could lead to public nuisance if not properly managed or done with wisdom. For example, some might scatter food in public places or even in their houses to feed birds, or stray cats and dogs without concern for hygiene, leading to the breeding of ants, cockroaches, and rats which could cause the spread of diseases. Likewise, some do not remove or clean the dirty water out of misguided compassion, resulting in the breeding of mosquitos that could spread diseases such as dengue.

While generosity through giving is good, this needs to be practised with wisdom and understanding of the nature and character of the beneficiary. Suppose a person who is addicted to drugs needs money, giving money to such a person who will use the money for such addictions will only cause more harm than good. Similarly, if donations were made to support negative causes, such acts of giving are done without wisdom, as they would bring more harm than good to oneself and society. Likewise, although being friendly is a good and virtuous quality, one needs wisdom in discerning the type of friends one associates with. Developing friendships with bad companies such as criminals or drug addicts will lead one to eventually become a part of the bad influence, and that is not being wise.

So heart qualities must be developed with brain qualities, otherwise, one will suffer in this life, create suffering for the others, and become a nuisance to the society.

One could become very clever, smart, intelligent, cunning, and wicked, ruthlessly willing to do anything just to achieve one’s objectives, without caring for anyone in the society, and without regard for whether it is right or wrong. Such a person who focuses mainly on achievements could develop into being a materialist, who would act at all costs, going to the extent of denying the importance of virtues. Such is the danger of developing only the brain qualities.

For example, a person who is very skilled in handling computers but who lacks heart qualities could misuse his intelligence and knowledge in technology to cause harm, such as by engaging in cyber-crimes, spreading viruses to computers, or hacking into others’ accounts to steal important data, possibly resulting in losses to both institutions and individuals. Similarly, an accountant who has good mathematical skills, if appointed to a leadership position in a financial institution, could misuse his skills to commit fraud and steal the money, if he does not have virtues.

The Buddha teaches that for people who only have brain qualities but who do not have heart qualities, whatever skills that they have, these skills are only going to destroy themselves and the world. Hence, the Buddha encourages us to develop both the heart and brain qualities, i.e. both compassion and wisdom.

Developing head qualities is emphasised in many materialistic societies. The younger generations who grow up in such societies are often pressed by parents to develop mainly the brain qualities but ignoring the heart qualities. Many parents expect their children to perform and excel in school, and achieve the materialistic aspects of life, often at the expense of developing the heart qualities. Sadly, some children could not cope with such pressures and ended up committing suicide. For those who made it, even though they might become very intelligent and successful, they operate like computers without heart qualities. With little understanding of human virtues, their desire to continue to measure up to their success by gaining more materials might lead them to obsessions, such as plotting to amass the fortunes of their parents, thereafter abandoning them in their old age. In such instances, the parents have only themselves to blame for not developing the heart qualities of their child in the growing years. Therefore, parents are encouraged to train their child not only to develop the brain qualities but also the heart qualities, both are equally important.

So how does religion come into play at this juncture? Generally speaking, religions encourage the heart qualities, that of faith and virtues. Buddhism, however, has the perfect balance between heart and brain, and encourages the development of both heart and brain qualities. Evidently, in the first two factors of the Noble Eightfold Path, we start with having Right Understanding (instead of mere faith) which requires brain qualities such as analysing, scrutinising, questioning, and learning, and Right Thought which comes from developing heart qualities through thoughts of generosity, loving kindness (or goodwill), and compassion. This provides the process of transformation for all practising Buddhists to train and develop both head and heart qualities right from the beginning, eventually leading to the attainment of enlightenment when these qualities are developed to the maximum level.