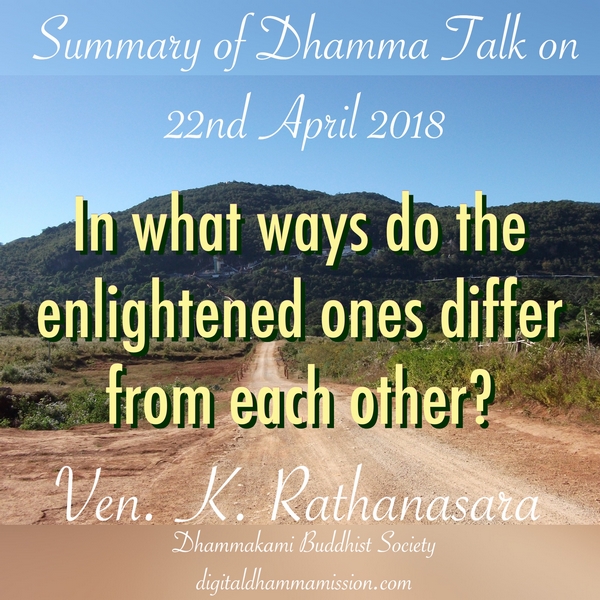 The purpose of Buddhist practice is to achieve enlightenment and, on this aspect, there are four Buddhist concepts that one should always seek to emulate. These are:
(1) Bodhisatta
(2) Samma Sambuddha
(3) Pacekka Buddha
(4) Arahant

With various Buddhist schools of teachings, it is important to note that the interpretations below are based on the Theravada school’s viewpoint.

A Bodhisatta refers to someone who is dedicated to cultivating himself to achieve enlightenment. He dedicates himself to strict discipline and training to become a fully enlightened Buddha in time to come. Bodhisattas cultivate these 10 virtues / perfections (parami), life after life, to achieve perfection: Charity, Morality, Renunciation, Wisdom, Energy, Patience, Truthfulness, Determination, Loving-kindness, and Equanimity.

Manifestations and perfections of these wonderful qualities result in supreme enlightenment. In discourses, the Buddha referred to himself as a Bodhisatta prior to his enlightenment. Bodhisattas can be in the form of humans, born in the divine realms or any other realms, where they will cultivate their perfections. After a long period of cultivating over many lives, by dedicating themselves to this righteous cause and noble goal, eventually such a person will become a fully enlightened Buddha.

Samma Sambuddhas (or perfectly enlightened ones) are very rare in the world. The Buddha said that Buddhas are beyond measurements. Just like deep oceans, they are very deep and profound, and are beyond name and form.

Thus, the Buddha is the first one to awaken Himself from the deep sleep of ignorance, is the discoverer of the Path, bringer of the light, proclaimer of the Truth, and the originator of this Dhamma. He also dedicated the rest of his life to proclaim this Dhamma to the world so that others too can follow this path and achieve enlightenment. Having achieved perfect peace and release from all sufferings and cycles of existence, the Buddha set up a system called Sāsana (Dispensation of the Buddha) with clear directions and instructions for monks, nuns and lay persons to follow so that they too may realise this Truth.

There are three aspects to the Buddha:

i) Perfect Purity – The Buddha is the ultimate purity for he has eradicated his defilements perfectly, permanently, and irreversibly, i.e. each and every defilement has been completely uprooted and there is no way to revive it.

ii) Perfect Virtue – He is the embodiment of great compassion, goodwill, friendship, generosity, loving kindness, appreciative joy and many other wholesome qualities.

Pacceka Buddhas are also known as the Silent Buddhas, i.e. human beings who have also discovered the lost path to enlightenment, but are limited in their wisdom, supernormal powers and abilities and the other extraordinary qualities of the Supreme Buddhas. Even though they awaken themselves from the deep sleep of ignorance, they do not have the ability to awaken the others from the deep sleep of ignorance. So, their enlightenment results only in liberation for themselves.

Arahants are also enlightened beings. However, unlike the others above, arahants do not discover the path. They achieve enlightenment through listening to the Dhamma expounded by the Supremely Enlightened Buddha and following the path.

Arahants can be classified into 2 major categories:

i) Arahants with extraordinary powers, such as the ability to read thoughts, see the past, perform miracles, etc. But their powers cannot be compared to that of the Buddha.

ii) Arahants who have achieved enlightenment but do not have extraordinary powers, i.e. human beings who have uprooted their defilements perfectly, permanently and irreversibly. Indeed, the mark of enlightenment is the eradication of defilements.

In conclusion, Supremely Enlightened Buddhas, Silent Buddhas, and Arahants, have something in common. All three have eradicated their defilements perfectly, permanently and irreversibly, are enlightened, and are equally liberated from the birth-death cycle and sufferings. However, they are different in spiritual powers and abilities. Buddhas are Supreme because of their Supreme qualities. Silent Buddhas are also Supreme because they discover the path by themselves, but they do not have enough qualities to establish the path for others. Arahants do not discover the path but follow the path discovered by a Supreme Buddha to achieve enlightenment, they also dedicate themselves to propagate the Dhamma by showing others the way to enlightenment. As for the Bodhisattas, from the Theravada point of view, a Bodhisatta is not yet enlightened, but is someone dedicated to cultivating towards enlightenment; this differs from the Mahayana Buddhist school which interprets the Bodhisatta as Enlightened Beings.