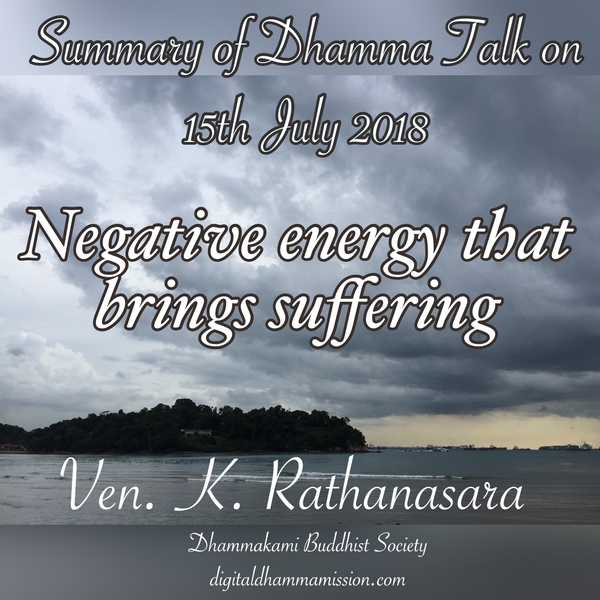 Negative energy refers to a kind of destructive unwholesome type of mental energy that we produce in our system. It is unwholesome karmic energy that manifests through our thoughts, words and action.

One day, as Buddha was walking from Jetavana monastery to the city of Savatthi, He came upon a group of children beating a snake. Approaching the boys, Buddha asked if they liked suffering. Having replied that they feared suffering, Buddha advised the children to stop harming the snake. In the same manner, just as one does not wish to suffer, one should refrain from harming others.

Negative karmic energy, produced through our own thoughts, words and actions, are actions that are morally blameworthy, spiritually harmful and karmically destructive. They produce misery and lead to suffering.

Firstly, they bring suffering here and now. One does not have to wait till the next life to see how negative karmic energy causes suffering. When defilements such as jealousy, hatred, anger, cruelty, ill-will and excessive greed arise in the mind, they affect one’s mind and body, causing one to live in suffering here and now. Thus, when one cultivates and harbours such defilements, it only brings about one’s unhappiness.

When these thoughts transform into speech, the suffering can spread in society. For example, when one speaks to another in anger, having unwholesome thoughts, the other person too becomes involved in that suffering. If this other person were to react in the same way with negative energy, there will be more conflicts, producing even greater suffering.

When such negative thoughts then transform into action, a socially destructive, unpleasant reaction will result. Thus Buddha said, “Those who produce negative karmic energy suffer here and now. They suffer both mentally and physically.”

We also have to be responsible for our actions in a society governed by law. If one were to commit any evil, one can be punished by the law, imprisoned or even executed in certain countries. Such is suffering that is created here and now due to negative energy which arises in the mind and spread through speech and action. For this reason, we have to be careful and take precaution not to produce negative karmic energy.

Secondly, Buddhism recognises such karmic energy is very powerful and can go beyond death. What goes from this life to the next is our mental energy, thus negative destructive karmic energy brings suffering not only in this life but in lives to come. One may be reborn in lower realms, and experience much suffering. There are many such stories and incidences revealed by the Buddha.

In one case, there was a monk who practised very diligently. Eventually the monk turned blind, yet at the same time became enlightened. One day while he was pacing in an open space, he stepped on some insects unknowingly killing them. A group of visiting monks who witnessed this brought up the incident to Buddha. Buddha explained that the monk, who became blind upon having gained enlightenment, could not have killed the insects intentionally. The group of monks were puzzled as to why this happened.

Buddha shared that the monk in his previous life was a very good eye specialist who in a fit of anger caused a woman, whom he had successfully cured from an eye disease, to become blind in an act of revenge for having lied to him about her condition. The woman had promised to work for him in order to repay his fees for treating her. But having been cured, she lied that her condition became worse instead to avoid paying him. Due to the doctor’s destructive action, he became blind in this life despite having practised diligently.