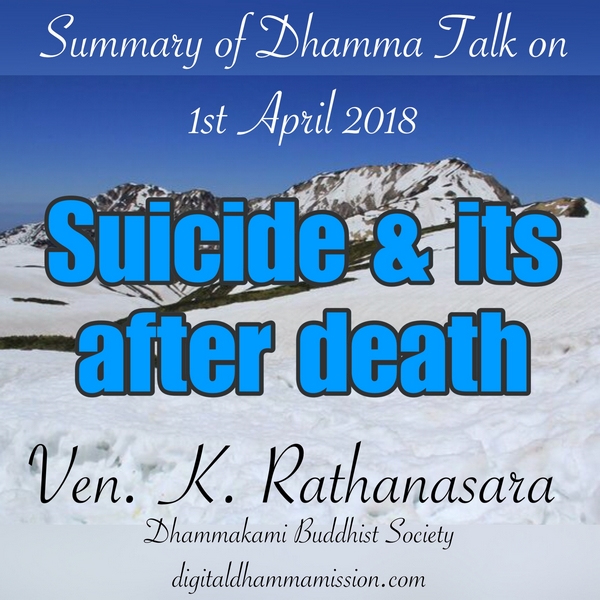 People commit suicide due to many different reasons and causes. It can stem from social issues (e.g. relationship problems, family issues), economic issues (e.g. unemployment, financial difficulties), ego or the inability to cope with failure/ stress (e.g. failing the exams), medical conditions or mental disorders (e.g. incurable diseases, schizophrenia, bipolar disorder), political disputes (e.g. as a way of protesting, as a strategy in war), or cultural issues (e.g. as a means to restoring honour).

Scientists and psychologists have studied and found that those with lower levels of serotonin (a neurological substance in the brain responsible for guarding the “happy” moods of human or which act as a defence against depression) have greater tendencies to commit suicide, and any form of suicide is always associated with some form of depression.

Spiritual leaders from many religions in the world have shared their views, generally against suicide, and they do not encourage the act of committing suicide. So what does Buddhism say about suicide? The Buddha recognises all human actions as either skillful actions which are ethically praiseworthy, spiritually beneficial, and karmically productive, or unskillful actions which are ethically blameworthy, spiritually harmful, and karmically destructive. Trying to end a problem by committing suicide is regarded in Buddhism as an unskillful action; doing so not only does not solve the problem, it is an unwholesome way out of a problem.

Human lives are so precious in the eyes of Buddhists, as this life is the culmination of many positive qualities and merits from past rebirths. Human beings have wonderful mental abilities and the potential to achieve perfect enlightenment, and the Buddha teaches us to use this precious human life to achieve enlightenment by following the Noble Eightfold Path to develop our ethical, spiritual, and intellectual faculties. So if someone destroy the human life by committing suicide, that person is in fact destroying this precious opportunity.

The Buddha teaches in the Second Noble Truth that craving is a cause of suffering; this includes craving for sensual pleasure, craving for existence, and craving for self-destruction. Hence, Buddhism recognises that suicide (self-destruction) is in fact deep rooted in the mind itself. The root cause of suicide is associated with hatred, in particular, the hatred for oneself. When things do not go as we wish, when we cannot perform as we expect, or when our body cannot give what we want, we might hate ourselves or have some form of self-destructive behaviour. Thus anyone could be potentially suicidal if such hatred with oneself is left unchecked. Hence when we practise Metta meditation, the first step is always to radiate boundless love and compassion towards oneself first, because only a peaceful person can give peace to the world, only a happy person can give happiness to the world, and only a person who is free from hatred can give love to the world.

So what happens after death in suicide cases? Buddhism recognises thought processes as rapid successions of thought after thought, and that the last thought of this life is the first thought and beginning of the next life. Since a person who is committing suicide is always associated with some degree of depression, misery, sadness, sorrow, hatred, anger, or pain, death by suicide will almost certainly lead to rebirth in lower realms of misery with possibly even greater sufferings, which counter the path towards enlightenment.

Those who end their own lives thinking that doing so would solve their problems, will in fact be born again and they will continue to suffer perhaps in more severe conditions. So suicide is not the solution to problems and is not encouraged in Buddhism.