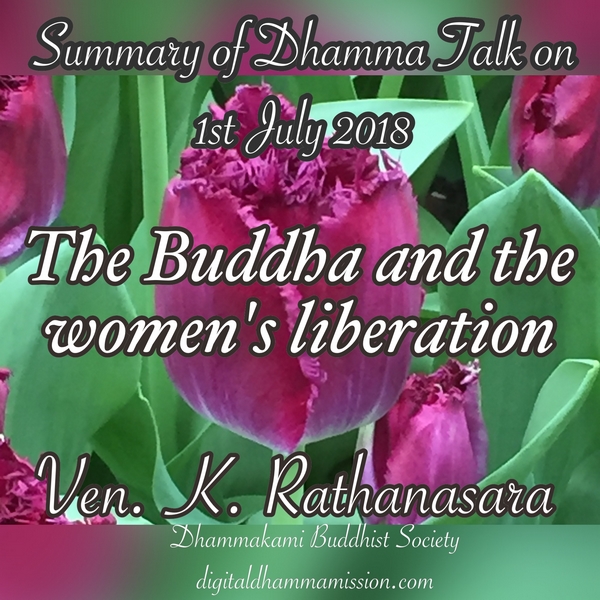 Unlike women in the 21st century who enjoy relatively high positions in the society, their counterparts some 2500 years ago were not given due recognition and were treated with disrespect, be it socially, politically, economically or educationally. In fact, the ways of life then were largely influenced by the doctrine of Brahmanism, resulting in a male-dominant society where men were considered to be superior to women. This is evidenced by various literatures, one of which is the Manusmriti. Among the rules listed in this ancient legal text, one stanza called for the dependence of women on the guidance and protection of men – as a child upon her father, a wife upon her husband and a mother upon her son – and that the freedom of independence must not be granted to females. Hence the birth of a boy, earmarked to be able to contribute to the society, was far more welcomed as a mark of prosperity.

It was said that when King Kosala was disappointed at the news of the birth of a baby girl by Queen Mallika, the Buddha advised, “Great king, lord of the men, some women are better than men. Bring the child up to be virtuous and moral. Such a girl will be a great queen to a great king, and she will be a great mother to a great ruler.”

This counsel expressed Buddha’s stand on gender equality: although differences exist between men and women, neither is inferior nor the other superior. Both genders have their capacities and abilities, both deserving of equal rights. In contrast to other religious teachers of that era, the Buddha spoke well of women. Such views were bold at a time when women were considered inferior to men.

Given the numerous social obstacles and barriers faced by women at that time, how did the Buddha help in uplifting their status in the society? How did He open the doors to the path of enlightenment by creating opportunities for women to achieve spiritual perfection and true liberation?

The Buddha attempted to elevate the social standing of women through His teachings on many occasions. For example, in the Sigalovada Sutta given to encourage wedded couples to be responsible to each other by carrying out a respective list of five duties for a happy, peaceful and healthy relationship, the Buddha exhorted men to honour and respect their wives by acknowledging them politely and by not belittling them. Respect for womankind was also urged by the Buddha when he visited the Vrijjian confederacy. When approached by the governing body for advice on keeping the community prosperous, the Buddha gave seven conditions for a non-declining society. Here the fifth condition required rulers to give deference to the decisions of women in matters of their marriage; that none were to be forcefully wedded. Child marriages, common and accepted during that period, were also discouraged by the Buddha. This is conveyed in one stanza of the Parābhava Sutta:

That if a man, past his youth, were to marry a teenage girl, he will suffer due to jealousy. The same discourse also dehorted womanizing, listing it as a cause of downfall in men in culture which accepted polygamy that was limited to men. The behaviour was also discouraged equally for both male and female through the third precept for His followers: to refrain from sexual misconduct. Indeed, the Buddha had advised men to remain faithful to their wives, listing this as the third responsibility they should carry in the Sigalovada Sutta.

The Buddha also tried to boost the status of women as mothers. Viewing motherhood as one responsibility that calls for the greatest respect, He stated “mata mittam sake ghare” – the Mother is the best friend at home, and the one who cherishes and nourishes the child above others. In Karaniya Metta Sutta, the Buddha used mothers as example for loving-kindness: “Mātā yathā niyaṃ puttaṃ āyusā ekaputtam anurakkhe” – like a mother who protects her only child at the risk of her own life, so one should cultivate boundless love and compassion.

In line with the general attitude towards women in ancient India 2500 years ago, many religious traditions did not believe in the capability of women in spiritual heights and awakening, even when there had been some women who had renounced the worldly life. On the other hand, the Buddha was impartial when it came to the spiritual cultivation of women, having declared that women are as able as men to achieve enlightenment. This was in response to the question by Venerable Ananda if women can attain such spiritual heights when given the opportunity to practise the Dhamma. Additionally, He established an organized system with two chief bhikkunis – the Bhikkhuni Order – for the sole purpose that women could go forth with the practice of religious life. With this ministry, many women from all walks of life, having practised under His guidance, attained different stages of sainthood and took on the role of Dhamma propagation. Just as He did among bhikkhus, the Buddha recognized bhikkhunis who were well-educated, scholars and who had attained spiritual heights. In one incident, after Bhikkhuni Dhammadinnā delivered a discourse to lay follower Visākha, the Buddha affirmed that if He had given the Dhamma talk He would have conducted it the same way as she did. The bhikkhunis who achieved enlightenment under His guidance would subsequently share their experiences of bliss and happiness of Nibbāna in The Therigatha, a collection of poems.

The teachings of the Buddha on numerous occasions indicated His attempts to uplift the status of women both in the mundane life and spiritually. Socially, He advocated the acknowledgment of women as ones who should enjoy gender equality and rights; that their decisions be made independently and wishes respected even by the kings. He had also created the opportunity for women to achieve true liberation by opening the door to enlightenment. These instances, especially during the period 2500 years ago, demonstrated the Buddha’s compassion towards women and His positive attitude towards Women’s Liberation.