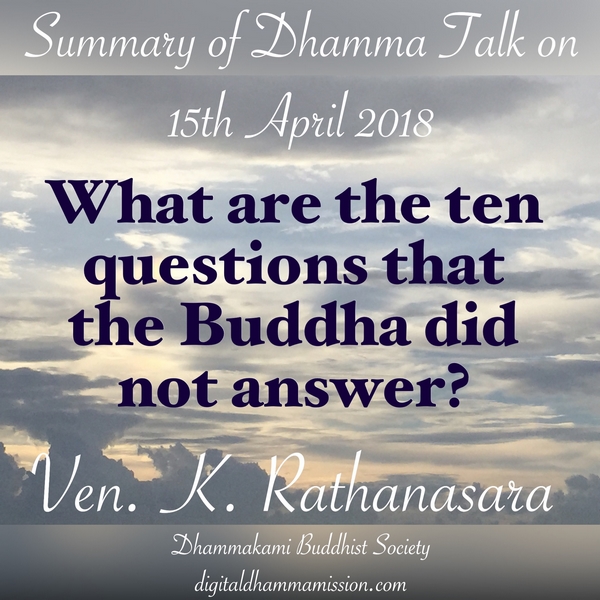 Throughout the forty-five years after his enlightenment, the Buddha had answered many questions asked to him both by human beings and divine beings. Depending on the nature of the questions, the Buddha had largely responded using one of the four ways: 1) He gave unequivocal answers to questions which have direct answers; 2) He elaborated on answers to questions which require careful analysis; 3) He replied with counter-questions to guide the inquirer towards forming an answer; and 4) He kept some questions aside. In particular the Buddha kept silent on ten questions. These undeclared questions that were kept aside are:

(1) Is the universe eternal?

(2) Is the universe not eternal?

(3) Is the universe finite?

(4) Is the universe infinite?

(7) Will the enlightened one be reborn after death?

(8) Will the enlightened one not be reborn after death?

(9) Will the enlightened one both be reborn and not be reborn after death?

(10) Will the enlightened one neither be reborn nor not be reborn after death?

It had been speculated that the Buddha kept silent on these questions simply because he did not know the answers. This belief, however, could not be supported when the discourses were analysed – the Buddha had proclaimed on several occasions his ability to comprehend the unseen and unheard. One such discourse was in the Siṃsapā Forest where he took a handful of leaves and asked his disciples which are greater in number, those in his hand or those in the forest. Affirming his disciples’ answer that the number of leaves in the forest was undisputedly greater, he likened this to the difference between what he had taught and what he had known.

A second possible reason was that although the Buddha had the answers, their profundity meant that it was difficult to provide an explanation in a manner for the inquirers to comprehend. Indeed, immediately after his enlightenment, the Buddha hesitated to teach the Dhamma that he had realised due to its subtle, sublime and profound nature which is difficult for humans who are embroiled with delusions. The Buddha changed his mind after Brahma Sahampati, a divine being, entreated him to teach the Dhamma as there may be some who might see the Truth.

The third reason for Buddha’s silence was that the questions were speculative or wrongly composed, or that the questioners were not in the position to understand the answer. Answering these questions could only lead to more confusion. Instead, the Buddha encouraged individuals to practise diligently so as to attain enlightenment in order to realise the answers independently.

Finally, the Buddha’s refusal to answer could also stem from his refusal to fall into either of the two major belief systems of other religions – eternalism and nihilism. Answering these questions would have led the Buddha into a pitfall that he wisely avoided. In fact the answers to some of these questions about the universe have remained a mystery despite numerous scientific researches attempted over the years. However, in light of such researches, some theories formulated by various religions had been disproved. On the other hand, Buddha’s teachings, which focus on the Four Noble Truths, Dependent Origination, Three Marks of Existence and Five Aggregates of Clinging, are coexistent with science. Followers are thus encouraged not to be disappointed with Buddha’s non-answers as Buddhism, a spiritual path that leads to awakening, is fundamentally focused on suffering and the cessation of this suffering.