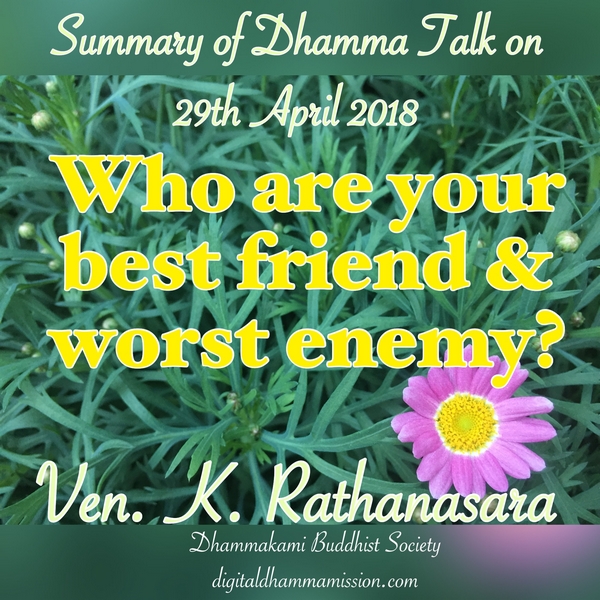 A best friend is someone who will always want the best for you, is ready to make sacrifices for you, rejoices at your successes, and guide and lead you in the right path. He is also compassionate, has goodwill and friendship towards you, is virtuous and always upholds the righteous principles.

For most of us, such qualities would conjure to mind a mother or father or a close relative. While Buddha did not deny that such a person could be one’s best friend, he emphasized that a well-cultivated and well-directed mind could surpass even what the most excellent mother or father or relative could do.

Then who is your worst enemy? Again Buddha said, the answer lies in the mind which has been conditioned in evil, wicked, immoral ways. Such a mind will bring one harm and danger. When one develops an unwholesome mind, the person becomes devoid of moral shame and is not afraid to commit evil, wicked, immoral deeds. Consequently, these unwholesome actions become the seed for negative karma to materialise, and create a future of hell for subsequent rebirths resulting in suffering life after life.

Dwelling deep within us are two personas: the Bodhisatta character and the Mara character. The Bodhisatta character is dedicated to cultivate all virtues. He takes positive actions to cultivate wisdom and compassion and will bring out the best in you. Mara, the evil one, is equally powerful! A weak mind will be easily influenced by Mara. When unwholesome qualities like greed, lust, hatred, anger, jealousy, ill-will manifest and are frequently reinforced, Mara will take possession of the mind enslaving one to endless desires and cravings. So friends, ‘vote’ for Bodhisatta! Do not let Mara win! Only then can you have a blissful life.

Buddhism is all about mental training. Saints, criminals and even animals have the same physical makeup and bodily functions as the ordinary human being. If a careful examination and comparison were to be carried out between the physical form of a criminal and the saint, one would not be able to find any difference. The only difference lies in the mind. The enlightened mind is awakened while the criminal mind is deluded. Similarly, the physical body of an animal is no different from the human being. Animals too, are endowed with the five-sense faculties and their bodily functions are all identical to ours. Again, the big difference lies in the mind. Human beings have the mental capacity to develop the mind intellectually, spiritually and ethically to achieve enlightenment whereas the animal mind is dull and simplistic and not capable of achieving spiritual enlightenment. Their sole concern is survival.

Buddha, in the Dhammapada Verse 1, reminds us that all mental phenomena have mind as their forerunner. Every single action that we perform originates in the mind. The body is only an instrument through which our thoughts could be translated into actions.

When one carefully examines the Noble Eightfold Path, one would realise that all the eight factors advocated by the Buddha have mind as the forerunner. The three factors that constitute ethical and moral conduct, namely, Right Speech, Right Action, Right Livelihood, have their bases in the mind. For example, when you practise Right speech, the thoughts would first be formed in your mind and the words then become transmitted through your oral faculty. Likewise, harsh speech, slandering speech, divisive speech… they all have their origins in the mind. While mental discipline can be achieved through Right Effort, Right Mindfulness and Right Concentration, wisdom is to be cultivated through Right Thought and Right Understanding. All these eight factors involve mental training and perfecting the mind culminating in enlightenment.

There are four ways to condition the mind to be your best friend:
1. Having noble friends (kalyanamitta).
2. Engage in learning and listening to the Dhamma.
3. Practising the Dhamma daily.
4. Developing mindfulness through meditation.

Like the lotus plant which rises above the muddy water and gives bloom to the beautiful flower, when we train diligently in the above four ways, we can embark on the Bodhisatta journey and become enlightened.