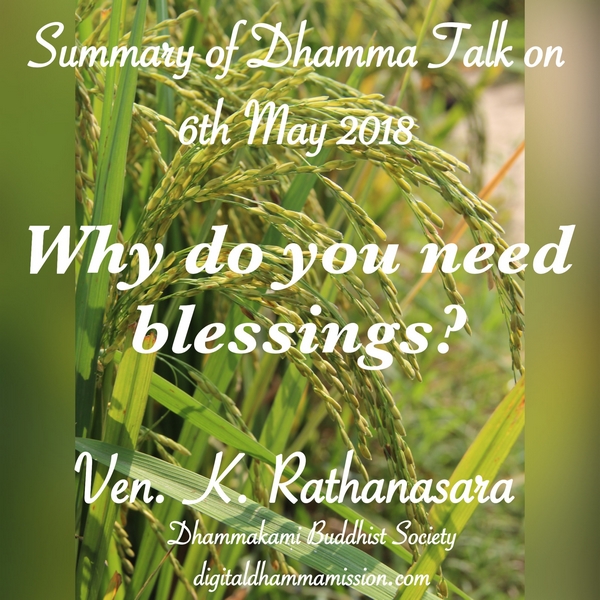 When someone wishes you a good morning or a happy birthday, he or she is in fact giving you a blessing, an ordinary, everyday kind of blessing. In religious practice, the well-wishes are elevated to a spiritual realm; for examples when we ask a monk or a nun, or even someone who is well practised in the path, to give blessings for a new home or to help someone who is hospitalized to recover.

The roots of this practice can be traced to the Buddha himself. One instance involved the unusual case of Princess Suppavasa, a daughter of King Koliya. She was pregnant with a child who could not be delivered and stayed in her womb for seven years and seven days. She was by then in excruciating pain but found comfort just reflecting on the qualities of the Buddha. She sent her husband to inquire after the Buddha and to tell him about her condition, which he did immediately. Upon learning about her plight, the Buddha uttered, “Princess Suppavasa, may you be well and happy. May you be free from all afflictions and may you give birth to a healthy son”. With those words, her son was born. (Suppavāsā Sutta, Udāna 2.8.)

A second remarkable event of a blessing by the Buddha took place in the city of Vesali. The once prosperous city was suffering a long period of drought. There was famine; people were dying. With the number of corpses piling, disease began spreading and evil spirits came to dwell. Desperate, the city sought the help of the Buddha, who was then living elsewhere, in Rajagaha. When the Buddha, together with a large following of monks, arrived at Vesali, rain came pouring out of the skies; so heavy that it thoroughly cleansed the city. There, the Buddha delivered the Ratana Sutta (The Jewel Discourse) in which he expounded the virtues of the Buddha, Dhamma and Sangha. Each stanza ended with the phrase, “By the power of this truth, may you be well and happy”. In this way, the city of Vesali and its inhabitants were showered with blessings (Ratana Sutta: The Jewel Discourse, Sutta Nipata, 222-238).

Other examples in the sutta that demonstrate the power of blessings include the times when foremost monks like venerables Mahakassapa and Mahamoggallanna were taken seriously ill. On those occasions, the Buddha helped them recall the seven factors of enlightenment, after which they became well again (Gilana Sutta, Samyutta Nikaya, 46: 14). Then, there was the incident when Venerable Angulimala, who was once a notorious serial killer, came across a woman who was having such difficulty delivering her child that she might die. In that instance, Angulimala too offered the woman a blessing, wishing that she and her unborn child would be well and healthy. Indeed, the woman proceeded to give birth safely (Angulimala Sutta, Majjhima Nikaya 86).

The above are examples of external blessings. What gives them their potency is that they come from people with specific qualities. The first group of such people are the enlightened ones. Completely free from greed, hatred and delusion while full of compassion and goodwill, they have perfect concentration and always uphold the truth. The second group are not enlightened but their power comes from their spiritual cultivation. They are monks, nuns and lay people who are well-practised in the path and developed in their morality, mental cultivation and wisdom. They too are full of compassion, goodwill and virtues and have attained some level of concentration through meditation. They uphold the truth as their fundamental quality. The final group of people who are able to bless you are your own fathers and mothers. They have this capacity simply by their sheer compassion and goodwill for you. In Buddhist thinking, these are the three groups of people who are able to give you external blessings – by uttering the Buddha’s words, performing meritorious deeds, practising meditation or other spiritual activities while sincerely keeping you in mind.

Even more powerful than external blessings, however, are the internal – blessings which come from our own efforts to practise the Dhamma and follow the Noble Eightfold Path to be a blessed one. Through mental cultivation and developing our morality and wisdom, we will find ourselves happy and joyful in this life – and beyond. The Buddha tells us not to depend on others but rather to be a light to oneself. The Buddhist practice is one of transformation so that you become a better human being and a blessing to society.

Of the two kinds of blessings, the external can have powerful but temporary effects. It is the internal that can turn you into a blessed one, a source of light for the world.