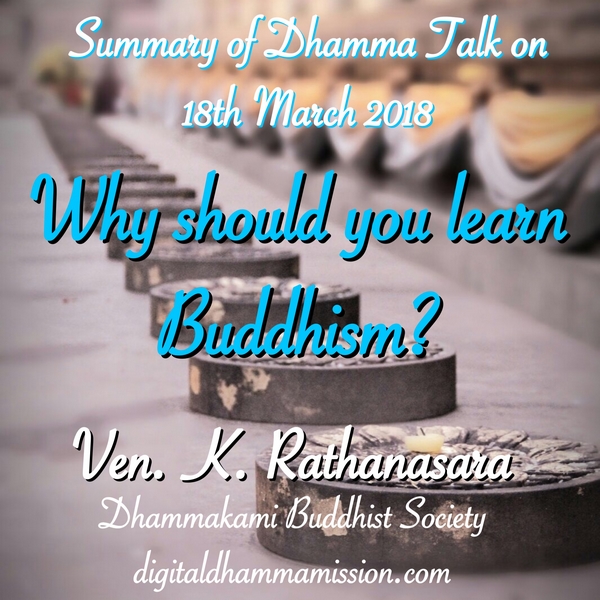 Why should you learn Buddhism? Buddhism is a man oriented, human centric, and earthbound religion, making it unique and different from other beliefs. This is an intricate subject and we need to have a deeper understanding for a better appreciation.

The Buddha’s teachings come from His own realizations. In His first Discourse, the Buddha shares that after achieving enlightenment, it arose in Him vision, knowledge, wisdom, and insight to things unheard before. The Buddha is thus known as the supremely enlightened one who has no other teacher that is equal to Him. The Buddha is also the teacher of gods and humans, as evident in some Discourses, where it is mentioned that even some divine beings approached the Buddha for questions and clarifications.

The Buddha does not demand blind faith for His teachings. In fact, He gives us much freedom to think and analyse. The Buddha encourages us to come and do thorough investigation on the teachings that He has realized and proclaimed to the world as the Truth. The Buddha further proclaimed that disciples too can achieve the same status of enlightenment as the teacher, and He teaches us how to follow this path to get living experience of enlightenment.

In the Kalama Sutta, people consulted the Buddha which religious teacher should they believe as all proclaimed that their own religion is the only true religion. The Buddha teaches that we should not believe anything just because it is written in sacred books, passed down from generation to generation, believed by many people, or said by a clever speaker or respected teacher. Instead, we should analyse and scrutinise, and then adopt those which are understood to be good, and avoid those which are bad. So analysing, scrutinising, and questioning, is very much encouraged in Buddhism.

Buddhism gives due credit to human kind, and teaches that human beings have the potential to become enlightened and only human beings have the potential to become a Buddha. As human beings, we are responsible for our own purity and impurity. If we do evil, wicked, immoral, unwholesome deeds through our thoughts, words, and actions, then we are defiled and we create our own hell and miseries. On the other hand, by adopting wholesome, positive, and constructive thoughts, words, and actions, we are purified. So the Buddha gives due credit to human credibility and intelligence, and recognises that humans are mature enough to be responsible and accountable to ourselves.

In Buddhist practice, the Buddha does not make human beings subordinate to any supernatural powers, and we do not pray to gods nor divine beings for intervention, salvation, or freedom. Instead, we perform meritorious deeds and then share the merits with the divine beings. Having shared the merits, sometimes we might seek the divine beings’ blessings but such blessings are for helping with our day-to-day lives, not for the purpose of going to heaven or gaining enlightenment.

In Buddhist practice, three things are essential: understanding, practice, and realisation. Understanding and practice must go hand in hand in order to realise Nibbana. This is achieved by following the Noble Eightfold Path to develop our ethical, spiritual, and intellectual qualities. So Buddhism is for people who are energetic and striving, who are investigative, who ask questions and analyse, and who are ready to take the challenge to test the teachings. Hundreds and thousands of human beings have understood the teachings of the Buddha, practised, and achieved enlightenment – this path is also open to us.

There are many other reasons why we should learn Buddhism, but the above is enough to convince us to start learning. Rather than believing in what has been taught, take the first step to come and learn, practise, and experience it personally.