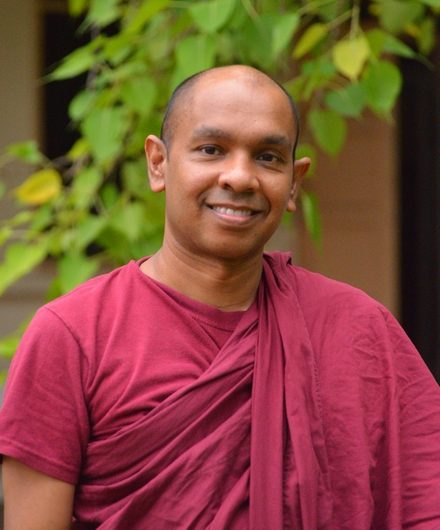 Venerable K. Rathanasara was born in the village of Kanugolle, near the small town of Bibile, in South Eastern Sri Lanka. He was ordained as a novice monk in 1984 at the age of twelve. After fourteen years of monastic training, he received his higher ordination (Upasampadā) in 1998 at the Malwatu Mahā Vihāraya in Kandy, Sri Lanka. He holds a Bachelor of Arts (Special) degree in Mass Communication, a Postgraduate Diploma in Fundamental Buddhist Studies, and a Master of Arts degree in Buddhist Studies, from the University of Kelaniya.

Venerable K. Rathanasara joined the famous Sri Lankaramaya Buddhist Temple in Singapore as Resident Monk in 2001. After sixteen fruitful years at the temple, in 2018, he heralded a new beginning in his lifelong monastic career by dedicating full time to teaching the Dhamma at the Dhammakami Buddhist Society in Singapore, where he is the Founder and Spiritual Advisor.

An eloquent speaker, Venerable K. Rathanasara is a well-respected and frequently sought-after Dhamma teacher. His Dhamma talks, Sutta classes, religious functions and retreats consistently witness a growing interest among the attendees. An author of many well-received Dhamma books, Venerable K. Rathanasara also delightfully takes on the Spiritual Patron role in many Buddhist organisations.