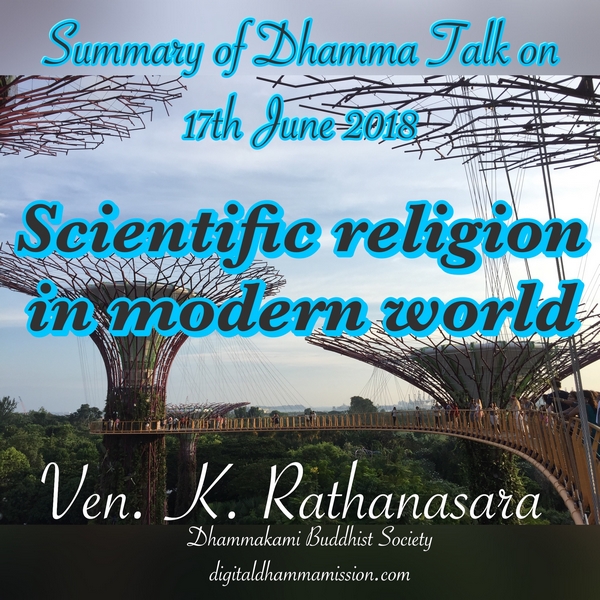 Albert Einstein once said that “if there was any religion in the world that would cope with modern scientific needs, it would be Buddhism.” The proliferation of science in modern times have enabled us to broaden our understanding of the universe and to gain new perspectives on nature and the world we live in.

Previously, when human beings were still primitive, the causes of phenomena that were not understood such as natural disasters and epidemics were often attributed to supernatural beings. This lack of understanding and control over the unknown resulted in many people seeking refuge in religion and idol worshipping. With scientific advancements and new discoveries over time, people gained knowledge of the workings behind natural phenomena and began to dismiss religious folklore, myths, and beliefs such as “a flat world”. Nevertheless, throughout the 2,500 years of its existence, Buddhism has remained unchallenged by science. Why is this so?

The fundamental reason behind this is that both science and Buddhism are grounded in truth, reality and knowledge. Science reveals the truth of the external world through experiments and pushing the boundaries in various scientific fields; Buddhism dispels the darkness of the internal mind through enlightenment.

In fact, there are five reasons why Buddhism is more suitable for the modern world than the ancient world:

1. Like in the practice of science, Buddhism emphasizes freedom of thinking and right understanding. Buddhist devotees are encouraged to question, analyse, and not accept the Dhamma on blind faith. Similar to how a goldsmith would do his necessary checks to ensure the piece of metal is indeed gold, Buddhist devotees are welcomed to investigate and apply critical thinking to the Dhamma and not accept teachings at face value simply because it has been recorded in holy books, passed down from generations, preached by religious teachers, or believed by the majority.

2. The Dhamma is visible here and now. Unlike other religions where the ultimate goal (e.g. going to heaven) can only be achieved after death, it is possible for a Buddhist to attain his ultimate goal of achieving Nibbana during his lifetime. Like Buddha who achieved enlightenment as a human being, people may verify the truth of the Buddhist teachings in the present if they so wish.

3. The Dhamma is existing and timeless. The Buddha said: “…whether or not Buddhas arise in the world, the Dhamma remains as a truth, it is an existing reality.” This Dhamma refers to the Four Noble Truths. In a similar vein to how gravity was discovered but not produced by Isaac Newton, a Buddha is the discoverer of the Dhamma, but not its creator. The Dhamma is a truth that transcends time.

5. Buddhism recognises action and responsibility and the interdependence of humans and their natural environments. Buddhism teaches that human beings are but a species amongst the rest of the flora and fauna that exist on this planet. This means that human beings, despite our high functioning abilities, do not have the authority to plunder this planet. Instead, it is our duty to be responsible for our own action and take care of our environment. In this way, Buddhism expounds self-responsibility, where we do not have to depend on others for forgiveness or reward, but instead it is up to ourselves to behave in a responsible manner to create a pleasant way of life for ourselves and others.