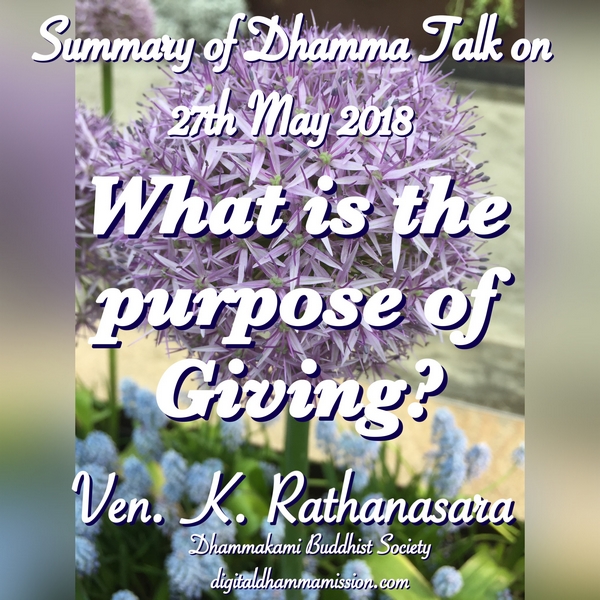 Individuals give for various reasons. Some give for the sake of fame, and expect that the deed be recognised. Some give out of fear, such as that of losing their social status or of incurring the wrath of God. Some individuals may also give in exchange for overcoming the negative karmic effects from their unwholesome actions and livelihoods. Others may give due to social pressure and do so accordingly out of anger. Lastly a number of people practise conditional giving; that is, the act of giving comes with expectation of something in return. Though the above are labelled as giving, they stem from a defiled mind – one that is filled with greed, anger and delusion – and as such they are not true charity.

In Buddhism, the act of giving is known as Dana, a special and specific form of giving. Done so out of benevolence and generosity, freely and openly without strings attached, it is one of the most beautiful actions one can perform. With the right understanding and virtue, practising Dana brings blessings to one’s life and to the society. In fact from the Buddhist’s point of view, wealth is gained for two purposes: the provision for one’s needs and for those of family, friends and society.

The practice of Dana is rooted in two aspects: puñña kamma – meritorious actions, and kusala kamma – skillful actions. In the first aspect Buddhists perform the wholesome act of giving that is motivated by compassion, good-will and friendship for the recipient of the action simply because it is a meritorious deed that in itself brings happiness. The second aspect of Dana, aimed at uprooting attachment, results from the volition to give. This is attained through the requirement that the deed is completed with generosity instead of greed, compassion instead of hatred, and understanding instead of delusion.

The accumulation of merits from Dana depends on three important factors. The first, citta – the mind of the giver – must be kept pure, serene and peaceful before, during and after the act of giving. Potential givers are thus encouraged to ponder before the act in order to give purposefully and joyfully, without regretting the deed after. The second factor involves the purity of the gift. Regardless of the item that is offered, be it food, drink, clothes or money, the gift must be obtained in a pure, wholesome way. This implies that any wealth apportioned for a charitable act must be earned in a righteous manner that did not bring about the suffering of others. Although used items can also be presented as gifts, such objects should be useful and not inferior or defective. Purity of the recipient is the third and last factor. It is said that King Kosala once asked the Buddha, to whom should he give for best results. The Buddha advised the King that gifts to the worthy ones – those who are free from defilements – would accrue the greatest merit. This is reflected in one of the verses in the Salutation to the Sangha:

One may also give to whomever one wishes as long as it is done happily. The Buddha expounded the five manners of giving which are beneficial for individuals who wish to practise the act of Dana in pure, righteous and wholesome way. The first requires the donor to give with faith; by doing so the individual will be graceful and pleasant-looking in the next cycle of existence. This is because faith in the Triple Gems cultivates a calm and serene mind which when combined with the act of joyful giving produces karmic energy that result in a graceful appearance of peace, joy and happiness. Secondly, individuals are encouraged to give with generosity; in doing so one is able to enjoy finer things wherever he is reborn. This is because those who give generously to the best of their abilities, regardless of wealth, prime their minds with the virtue and will thus receive the fruits of the action as they ripen. The Buddha also encouraged individuals to give with respect. When one gives with respect, one willingly listens to those whom he gives, which as a result earns him respectful and attentive followers. The fourth involves giving without denigration – that the donor does not belittle the recipient but instead offers the gift respectfully with both hands. The respect should also be extended to all living beings, both humans and animals. By doing so, the wealth belonging to the giver will be protected from destruction in the next cycle of existence. In the last and fifth factor, one should give at the proper time to meet the need of the recipient, be it tangibles such as food and medicine, or the intangibles such as words of counsel. As a result, when in need one also receives timely help.

Great blessings can be attained by giving with understanding. Followers are thus encouraged to be mindful of when they can be of service and what they can do best for the others and the society.